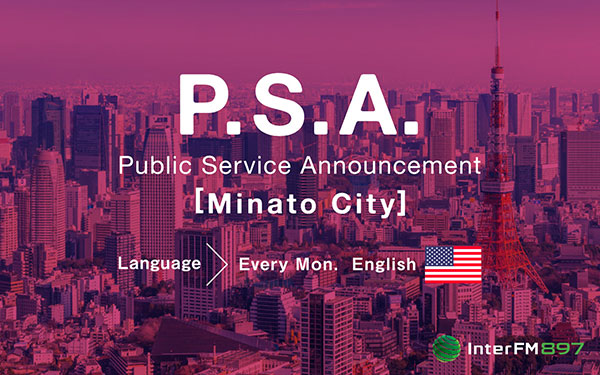 Friday 22nd - Sunday 31st October is the Clean Campaign period for bicycles that are illegally parked in front of stations.

In order to make the city’s streets attractive and to make the city comfortable to live in, please abide by the manners for bicycle use and stop parking bicycles illegally.

When bicycles are left unattended, they block the pavement and obstruct the passage of pedestrians, especially the elderly, young children and people with disabilities.

They also hinder evacuation and rescue operations in the event of a disaster.

Make sure you park your bicycle in a designated place such as a bicycle parking lot.

Bicycles left on public roads around stations will be removed once a certain period of time has passed following a warning.

A removal fee will be charged when retrieving such bicycles.

Libraries in Minato City lend out books and magazines, CDs, DVDs and videotapes.

Anyone who lives, works, or studies in one of Tokyo’s 23 wards can use the libraries by getting a library card made.

When using the libraries for the first time, please take ID such as your My Number Card, driving license, health insurance card, worker ID, or student ID.

Opening hours are from 9am to 8pm Monday-Saturday, and from 9am to 5pm on Sundays, national holidays and 28th December.

Opening hours at Takanawa Library Annex only, are from 9:30am-8pm every day, except national holidays when it is closed.

Please note that there are some other days when it is closed too.

The subsection in charge at Minato City Hall is the General Affairs Subsection of the Library and Cultural Assets Section.

The Recycling and Sale of Bicycles / Akasaka/Aoyama Meet Up Project